Best BA and MA Thesis on the Ancient Near East, 2018

We are pleased to announce the winners of the NINO BA and MA Thesis Prize 2018: 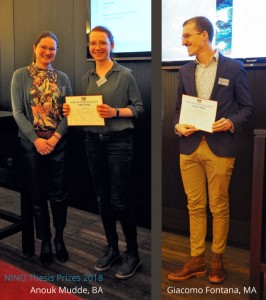 We received twelve theses from three Dutch universities and nine different study programs – from Linguistics to Egyptology and from Theology to International Relations. All essays were graded with an 8 or higher by the supervisors and the jury was impressed by the exceptional merit of each.

The jury was unanimous in its selection of the winners and runners-up in each category. 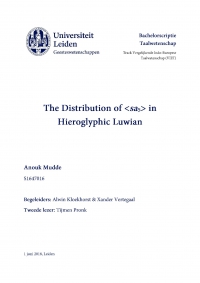 The thesis deals with the distribution and possible phonetic representation of the sign <sa5> in Hieroglyphic Luwian.

In this thesis, I have examined whether an underlying explanation can be given for the seemingly random interchange between signs that are believed to have the same phonetic representation (so-called allographic signs), specifically for the sign <sa5> as opposed to other signs of the sa-series. Using the corpus of the Hieroglyphic Luwian language, I examined whether a distribution can be established for the sign <sa5> as opposed to the other sa-signs. Indeed, there seems to be such a distribution: 67% of all occurrences of the sign <sa5> have the sign <ra/i> attached to it. Crucially, the sign <ra/i> is only incidentally found after other sa-signs than <sa5>, indicating that the co-occurrence of <sa5> and <ra/i> cannot be explained as mere coincidence. Moreover, the verb asaza- “to proclaim” is always spelled using the sign <sa5>: never another sign of the sa-series is found in this verb. These two findings suggest that <sa5> must have had a particular phonetic value, differentiating it from the other sa-signs.

Using comparative evidence from other Anatolian and Indo-European languages, such as the closely related Cuneiform Luwian, Hittite, and Greek, I argue that the vocalization of <sa5> in the sequence <-sa5+ra/i-> is “empty”, and that contact assimilation between /s/ and /r/ has taken place, resulting in a “fortis” sibilant /S/. This fortis /S/ was written with the sign <sa5> to distinguish it from “lenis” /s/, which was written using one of the other signs of the sa-series. Similarly, I deem it likely that the verb asaza- contained a fortis sibilant /S/, based on a reconstruction of this form. Using cognates of this verb in other Indo-European languages, a proto-form can be reconstructed in which a Proto-Indo-European laryngeal consonant h3 and a sibilant s were in direct contact of each other. In this cluster *-h3s-, again contact assimilation might have taken place, which would have rendered a fortis sibilant /S/ in Hieroglyphic Luwian as it did in Hittite.

The thesis has deeply impressed the jury. Its scientific and original quality was deemed remarkable for a BA thesis. One jury member mused about the student’s ability to improve the understanding of how a language and a script work by studying one specific detail. Another jury member recommended the thesis for publication in an academic journal. Reading the jury reports, one would forget that we are dealing with an essay by a third-year student.

Research MA in Archaeology (Town and Country in the Mediterranean Region and the Near East), Leiden University; thesis supervisor: Dr. B.S. Düring. 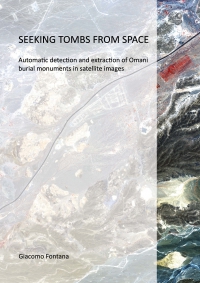 There are thousands of burial monuments in the Sultanate of Oman. Despite some gaps in the cairn sequence, they are among the most consistent evidence of the human occupation between the third millennium B.C.E. and the seventh century C.E. For this reason, they have been used as a proxy for researching the ancient communities that inhabited these territories. Unfortunately, the majority of the extant studies have failed to develop comprehensive and systematic analyses of these tombs.

The cause of the current situation is the absence of efficient methods to detect and record the burials. Traditional archaeological surveys cannot provide quantitative data for analysis of large areas. At the same time, the visual interpretation of satellite images is extremely time-consuming and cannot address the changes in archaeological data that have happened during the last decade. Recent developments in remote sensing have aimed to replicate the operation of visual interpretation automatically using computer power. This application has the potential to overcome the issues of the current methodologies used for the detection of the burial monuments of Oman.

This project aims to develop an efficient method to detect and record the burial monuments of Oman automatically. This approach allows for the limits of visual interpretation to be overcome and thus to fully exploit the quality and quantity of satellite images currently available.

Furthermore, this thesis seeks to go beyond the simple detection of the burials, developing a process aimed at automatically digitalising the tombs. This will allow for the extraction of morphological information that, together with the geographical position of the remains, will allow for the burials to be dated. As a consequence, it will be possible to create rich datasets of tombs suitable for use in addressing current archaeological issues. Furthermore, the automation will also greatly assist in monitoring the status of the remains over time. This is necessary due to ongoing developments and looting activities that threaten the preservation of the tombs. The study and preservation of the burial monuments are indeed urgent issues for the archaeology of the Middle East.

The winning MA thesis has achieved something exceptional. Giacomo has developed a new methodology to detect ancient monuments – not from surveys or through visual analysis of satellite images, but through automatic detection. “This project has instant societal value,” one jury member exclaims in his report. This method will not only aid archaeology but also the conservation of heritage sites in remote areas. “Send it straight to the publisher,” another jury member recommends. Yet another is grateful, and clearly relieved, that the student managed to present a readable study despite the technological complexity of the topic. 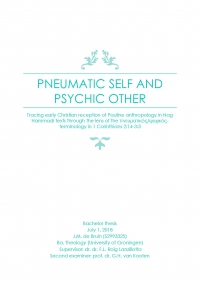 In his first letter to the Corinthians, now contained in the New Testament, Paul distinguishes between the ‘pneumatic’ (spiritual) and the ‘psychic’ (animate) man. The Greek roots of these words (pneuma and psyche) refer to spirit and soul, respectively. This distinction tells us something about Paul’s view of the human being, and can therefore be called anthropological. In the early Christian period, different strands of anthropological thinking developed. Observing that Paul was considered a champion apostle among several early Christian currents that were later stigmatized as ‘heretical’, this thesis raises the question to what extent and how Paul’s distinction between the ‘pneumatic’ and ‘psychic’ man functioned in the development of early Christian views of the human being. The Coptic texts found at Nag Hammadi, Egypt, constitute the body of textual evidence for these early Christian anthropological views. The research question is: did Paul’s anthropology at work in 1 Cor. 2:14-3:3 play a role in the development of the anthropologies apparent in the Nag Hammadi library, and if so, to what extent?

In order to answer this question, this thesis first analyzes the history and context of the distinction between ‘pneumatic’ and ‘psychic’ by comparing different usages in different philosophical contexts. Then, these findings are being used to reconstruct Paul’s view of the human being in our text from 1 Corinthians. After that, several texts from the Nag Hammadi library are being examined, selected by a concordantial search for ‘pneumatic’ and ‘psychic’ and their cognates in Greek and Coptic. Their reception of Paul’s distinction is finally characterized by identifying several parallels and relating different theories about identity to each other.

Regarding Paul’s anthropology, this thesis shows that the distinction in our text can be read with Middle Platonic (a particular philosophical interpretation of Plato’s thought emerging in the first centuries of our calendar) anthropology in mind. Furthermore, Paul parallelizes ‘spirit’ and ‘mind’, the latter of which he closely identifies with Jesus Christ. The ‘psychic’ man fundamentally lacks the spiritual discernment that these parallelized entities, coming in man from outside, provide. The concordantial search yielded a wide array of different applications in Nag Hammadi texts. Paul’s emphasis on the identification of ‘mind’ and Christ and on instruction is present. However, his rhetorical tone is replaced with an approach that seeks to divide humankind in different groups. This way, the Nag Hammadi texts amplify the distinction between ‘pneumatic’ and ‘psychic’ to become part of the early Christian social dialect of identity, in which selfhood and otherness are crucial aspects. It is to this far-reaching extent that Paul’s view of the human being in our text from 1 Corinthians was important in the Nag Hammadi texts.

MA Thesis, First Runner-up: Erwin Dijkstra – The Ambiguity of Forests: An Assessment of the Role of Forests in Mesopotamian Narratives Compared to Anatolia and the Levant 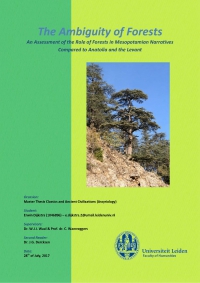 In a time when the public debate becomes increasingly divisive and different narratives prove to be inconsolable, the perspective that the humanities can offer is more important than ever. The past may be a foreign country, but these days it seems no more estranged from us than the political views on the other side of the proverbial aisle. As such, this thesis tries to give some perspective in the ever so current matters of inconsolable narratives and the distance to the mystified Other. This perspective is provided by answering the question if the role of forests in ancient Near Eastern narrative literature differed whether the people who told these stories were likely to encounter forests in their (daily) life. The backdrop for this endeavour is twofold: Can we learn about people – ancient and modern – through their stories and, aided by the knowledge the answer to this first question provides, can we link mystification to distance?

The rich tapestry of cultures which peopled three of the constituent parts of the ancient Near East, Mesopotamia, Anatolia and the Levant, have left us a rich narrative legacy. Additionally Mesopotamia was never really forested after the last ice age and lost most of the remaining trees and thickets by the second millennium BC, while Anatolia and the Levant continued to host large forests. Consequently this part of the world provides us with the means and the circumstances to answer our question. The examined corpus consisted of ancient narrative texts which more or less undoubtedly concerned forests. These texts had to be indigenous to the region – forested or otherwise – to be of use for the envisioned comparison; a difficult determination due to the idiosyncrasies of cuneiform sources.

The comparison of these narratives indicates that forests could play a multitude of roles, both positive and negative. Forests were par excellence a place for heroics – as an inimical obstacle to overcome for our hero, but also as a place outside of civilization where one could experience the undiluted divine. This explains the necessity of the many narrated heroic journeys to forests: the abundance of resources that could be found there – material, naturally, but also spiritual. These three functions, inimical obstacle, place to experience the divine, and a location for resources, were present in the narratives from every region. Consequently, the vicinity of forests did not seem to influence the role forests played in narrative literature. This thesis offers four explanations for this unexpected similarity, two of which I will mention. The first explanation concerns the way stories and motives where spread and borrowed throughout the eastern Mediterranean. The second explanation postulates that it was the nature of forests which led to their mystification and not their nearness.

The relevance of these conclusions goes beyond the shores of the Mediterranean. To understand current narratives and to achieve societal reconciliation with the mystified Other, we still have to ask whether our stories tell us who we are and if nearness can break such barriers. This thesis and its conclusions can hopefully offer a helpful perspective – for Assyriology, but certainly also beyond.