Three Sites to GO – and one to STAY! Reconnaissance in the Rania Plain (NE Iraq)

In October 2014 a small team organised by NINO carried out archaeological survey in the hinterland of Tell Shemshara. The NINO-University of Copenhagen Survey of the Rania Plain (Kurdish Region of Iraq) includes a 15 km radius around Shemshara, and was initiated autumn 2013. Four sites serve to illustrate the precarious heritage situation on the edges of Lake Dokan. 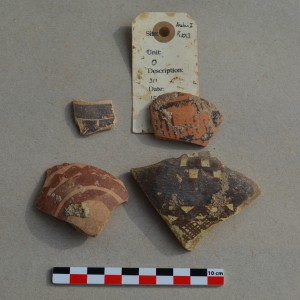 This article is also on our Facebook page with many more photos.

In October 2014 a small team organised by NINO carried out archaeological survey in the hinterland of Tell Shemshara. The NINO-University of Copenhagen Survey of the Rania Plain (Kurdish Region of Iraq) includes a 15 km radius around Shemshara, and was initiated autumn 2013 when the co-investigating team from Copenhagen explored a sector around the site of Bab-w-Kur (see the Bab-w-Kur Facebook page).

During a three week stay in Iraq the NINO team recorded some 30 archaeological sites, but the work was particularly focused on seasonally flooded sites near the artificial Lake Dokan. Autumn 2014 the water of the lake was unusually low, and this offered an opportunity to visit some sites otherwise rarely accessible.

Araban, located on the east edge of Lake Dokan, is an extensive, but low site with surface sherds dating to the Late Uruk and early Ninevite 5 periods (late 4th - early 3rd Mill. BC), and some later occupation. It seems almost completely washed away by the water, leaving only sub-surface pits and fire-installations in situ.

Gird Mamand, located just 3 kms south of Shemshara, is also an extensive, but low site with surface material principally of Sassanian date (3rd-7th cent. AD). Near the east, lake-side, edge, however, walls of sun-dried bricks and stone foundations are visible on surface, washed clean by the lake. In situ portions of this site thus remain.

Bab-w-Kur South, located some 5 kms southwest of Gird Mamand, is another low-contour site, with buildings of sun-dried bricks visible on surface, apparently the ruins of two large public-type complexes. The surface material seems to belong in the late 2nd Mill BC.

While the above three sites are fading and turning into - not dust, but mud - our fourth example, Gird Shaiwazan, is a different story. Located at the far northwestern corner of Lake Dokan, this site has been protected by a capping of limestone blocks, constructed in a later period, no doubt in an effort to turn the hill into a fortified stronghold. Sections of the stones have in recent times been removed to construct small enclosures (for animals?) at the foot of the site, and the denuded sections of the slope show walls of sun-dried bricks and burnt pits on surface. The surface material collected from the slopes of this site include sherds of Hassuna, Uruk, and early Ninevite 5 date.

Like the site of Tell Shemshara the three former sites are rapidly eroding and require urgent '2nd phase salvage', while the fourth - with some monitoring - seems likely to remain relatively intact, and in fact suggests a possible protective measure for other examples. Our project on the Rania Plain is designed very much to explore the extent of flood damage and potential remedies to it - also as these problems concern many other flood zones throughout the Middle East.

The NINO team was organised and directed by J. Eidem (NINO), and included M. Uildriks (LU): surveying and GIS, I. Kisjes (UvA): UAV photography and database, J. Orbons (Archeopro): geophysical surveys, Ivar Svensson (independent scholar): archaeological assistant, A. Amin (Sulaymania Directorate of Antiquities): representative and general assistance. We are grateful for the help and support extended by the Sulaymania Directorate of Antiquities and its director, K. Rasheed Raheem. The work is funded principally by NWO and NINO.