Assyriologist at the Netherlands Institute for the Near East (NINO), Leiden University, and Egyptologist at the University of Oxford show that ancient Egyptian astronomers computed the course of Mercury with Babylonian methods 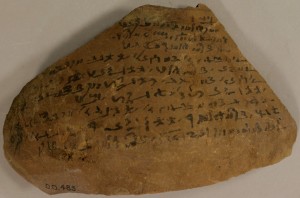 Egyptian astronomers computed the position of the planet Mercury with methods originating from Babylonia. This is proven by a study of two unpublished Egyptian instructional texts from the Ashmolean Museum (Oxford) by Mathieu Ossendrijver, Assyriologist and historian of science, currently Research Fellow of the Netherlands Institute for the Near East (NINO), Leiden University, and Andreas Winkler, Egyptologist at the Oriental Institute (Oxford University). The texts date to 1-50 AD and are written in the Demotic language, a late stage of ancient Egyptian, on two ostraca (potsherds). They are the only known texts from Greco-Roman Egypt with instructions for computing astronomical phenomena with Babylonian methods. The instructions correspond exactly to methods invented in Babylonia several centuries earlier (400-300 BC). Surprisingly, the ostraca employ a mathematical formulation not found in Babylonian texts but whose existence has long been suspected by historians of astronomy. The ostraca prove that native Egyptian scholars were as competent in Babylonian astronomical computation as their colleagues writing in Greek and they suggest a more important role for native Egyptian scholars in the transmission of Babylonian astronomy to Greco-Roman Egypt than previously known.

By the early second century BC Babylonian astrology and astronomy spread to Egypt. Like their Babylonian colleagues, Egyptian astrologers began to produce horoscopes in order to determine the fate of a newborn. The production of a horoscope required computing the zodiacal positions of Moon, Sun and the five planets known in antiquity – Mercury, Venus, Mars, Jupiter, and Saturn. Both Demotic horoscopes, written in a late stage of Ancient Egyptian, and Greek horoscopes have been found in Egypt. In 1999, the American historian of astronomy Alexander Jones proved that some Egyptian astrologers writing in Greek used Babylonian methods, e.g. for Mercury. Thus far only little was known about the computational methods of the native Egyptian astrologers writing in Demotic. In 1972, the Dutch mathematician Bartel van der Waerden proved that Babylonian methods were used in order to determine the positions of Mars and Jupiter in a single Demotic text.

The two newly identified Demotic texts with computational instructions shed new light on the mathematical skills of the native Egyptian astrologers. Both ostraca contain instructions regarding three distinct Babylonian algorithms. Each of them is concerned with a particular phenomenon of Mercury: its first appearance as an evening star, its first appearance as a morning star, or its last appearance as a morning star. The inscriptions offer the firsts unequivocal proof that native Egyptian astrologers, like their colleagues writing in Greek, were capable of computing positions of Mercury, a planet with a comparably complicated motion, using Babylonian methods. An analysis of the instructions suggests that the Egyptian scholars adapted these methods before their colleagues writing in Greek and independently from them. First, the ostraca predate all known Greek tables for Mercury that were computed with these methods - they are in fact the only instructional texts with Babylonian astronomy that have been found in Egypt thus far. Secondly, they use a Babylonian loanword for “degree”, while the astrologers writing in Greek used a Greek word for this.

A surprising aspect of the instructions is that they employ a mathematical formulation that is unknown from Babylonia. While the Babylonians compute the variable distance travelled by Mercury along the zodiac, e.g. between two occurrences of its first appearance as an evening star, directly, the Egyptian scholars first divide the zodiac into tiny steps of variable length. The distance travelled by Mercury they obtain by counting off a fixed number of these steps, with the identical result as obtained by their Babylonian colleagues. In 1957 the mathematician Bartel van der Waerden first suggested the existence of this alternative formulation. It has not yet been identified in any Babylonian text, but now in two Demotic texts written by native Egyptian scholars.

Mathieu Ossendrijver, Andreas Winkler, 2018, Chaldeans on the Nile: Two Egyptian Astronomical Procedure Texts with Babylonian Systems A1 and A2 for Mercury, in: C. J. Crisostomo, E. A. Escobar, T. Tanaka, N. Veldhuis (eds.), The Scaffolding of Our Thoughts: Essays on Assyriology and the History of Science in Honor of Francesca Rochberg, Leiden: Brill, 382–419.

Picture: Demotic ostracon O.Ashm.Dem. 483 with instructions for computing the motion of Mercury in accordance with a Babylonian algorithm (courtesy Ashmolean Museum Oxford)