Best BA and MA Thesis on the Ancient Near East, 2021

We are pleased to announce the winners of the NINO BA and MA Thesis Prize 2021: 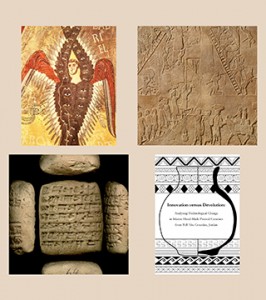 Ten theses, all graded with an 8 or higher by their supervisors, competed this year. They were written at three different universities in the Netherlands for different study programs:

We thank our jury for evaluating the competing theses in two rounds, next to everyone’s busy schedules. Awarding the prizes would not have been possible without our 12 jurors:

The jury selected two winners and two runners-up in each category. 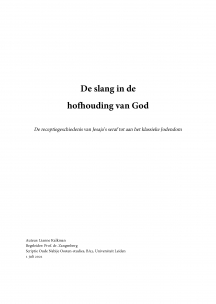 Much is unclear about the creatures that coexist with God in the heavenly realm described in the Hebrew Bible. Information about these beings is scarce and, when given, often cryptic or fantastic. One of the most intriguing heavenly creatures described in the Hebrew Bible is the seraph (שרף). Occurring in both the Pentateuch and the prophet Isaiah, this creature is often connected with snakes and is imagined as having wings. This description is not explicit enough to establish a definitive framework of how the seraph was perceived in ancient Israel. Due to its occurrence in canonical texts from both Judaism and Christianity, the memory of the seraph was preserved throughout the generations. Together with the few details that the Hebrew Bible gives about this being, this allowed for multiple reinterpretations of the creature against changing historical backgrounds.

This thesis investigates the reception history of the seraph in ancient Judaism until the composition of the Targumim. The text of the inaugural vision of Isaiah in chapter 6 of the canonical book of Isaiah is taken as a main source for this research as it is the longest text dealing with the seraph found in the Hebrew Bible. Isaiah 6 is translated from the Masoretic text and weighed against the background of the Ancient Near East from the estimated time of its composition. The conclusion that is reached this way about the perception of the seraph in early Israel is compared to what can be deduced about the seraph from the Septuagint and Targum Jonathan. How did early Jewish communities interpret this ancient text in changed religious environments? Attention is also paid to the religious framework in which the seraph occurs: how did monotheistic communities deal with this relic of a non-monotheistic past? It is in this context that the hermeneutical paradox comes into play. This thesis will show that the description of the seraph when translated into respectively Greek and Aramaic changed slightly, but that this was done in reverence of the sacred text and its supposed intended meaning.

The jury considered this work to surpas the requirements of a BA thesis, praising its originality and the fact the author was not only able to master the fundamental basics of three disciplines, but also to combine them. The awareness of the differences between the cultural and religious background of each of the texts under discussion make the thesis a remarkable achievement. 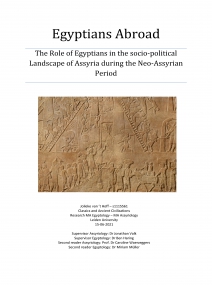 The relations between Egypt and Mesopotamia have often fascinated scholars, especially the famous Amarna Letters. However, not much attention has been dedicated to the contact between Egyptians and Mesopotamians on a smaller, more social scale. From both textual and archaeological sources it can be concluded that some Egyptians lived in Mesopotamia. Egyptians are mentioned first in Babylonia in 676 BCE and can also occasionally be found in cuneiform texts from the Assyrian period from the 8th to 6th century BCE, with the earliest possible attestation of a named Egyptian in the NeoAssyrian corpus being a man called mḫa-ru-a-ṣu who acts as a witness in a contract dated to 725 BCE.

Although some scholars have studied these Egyptians in the past, they have never been studied in great detail, especially regarding their place in society. As previous scholars mostly focused on their research on the Egyptians living in Babylonia, not much research had been done on their Assyrian counterparts until recently. Since almost all sources concerning Egyptians in Assyria come from the Neo-Assyrian Period (900-612 BCE), this timeframe served as the focus of this study in order to answer the question: ‘What was the status and social standing of Egyptians in Assyria during the NeoAssyrian Period?’ For this study, all individuals that were identified as possible Egyptians in earlier literature were re-evaluated, through which an updated list of supposed Egyptians could be created. By subjecting this dataset to statistical analysis, prosopography and Social Network Analysis new insights and conclusions on the position of the attested group of Egyptian in Assyrian society could be established.

This thesis shows that the attested Egyptians living in Assyria had integrated well into society and may have even participated in high society. Most Egyptians appear to have come to Assyria as deportees, which explains the presence of multiple Egyptian families in Assyrian sources, as complete families were often uprooted, instead of single individuals. Egyptians could invest, purchase houses, were treated equally before the law and could hold high positions. Once Egyptians were subjected to the same obligations as the Assyrians, they were seen as equals. Certain occupations seem to have been restricted to geographical locations, but this was likely a result of demand, not of inequal treatment. Despite this quick acceptance into Assyrian society, Egyptians did not feel pressured to assimilate as only a small number of Egyptian children were given Akkadian names and most Egyptians kept in contact with other Egyptians. The fact that multiple Egyptians bearing Akkadian names would have gone unnoticed to us, were it not for the Egyptian names of their children or the presence of an ethnic group label shows us just how well they blended into Assyrian society.

According to the jury, the thesis is of outstanding academic quality. They were impressed by the vast amount of sources that was studied, the rigid methodology, the sound analyses and the author’s overall command of the material. The thesis surpasses earlier attempts to study the role of the Egyptians in Babylonia and Assyria because of its truly interdisciplinary approach. 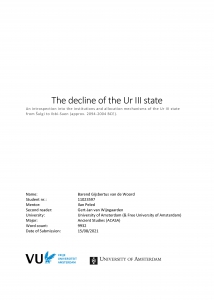 The thesis deals, as its title would affirm, with the changing character of the allocation mechanisms in the Ur III state. It does so by assessing these mechanisms from an institutional economic approach, subsuming that (in)formal rules are the foremost drivers of interaction. Within this some exchange systems find themselves discussed as well. Because the thesis deals with decline, it follows a diachronic structure, with 4 chapters moving through time. Along these lines the thesis tells two stories: one of the political histories of Ur from inception to fall (chapter 1 and 3) and one about the evolution of the internal organization (chapter 2 and 4).

Before these come to light, the introduction deals with denoting the use of allocation mechanisms as the economic model on which the Ur III state functioned and as a legitimation of introducing institutional economy into Sumerology. In this, problems are found concerning the distinction of formal and informal institutions along modern lines. This modern distinction is found within the question “who sanctions”, the state or the public. Following that sanctioning seems irretraceable, a division is offered based on introduction. However, the lack of sanctioning deems to be the reason of decline in the conclusion.

The political historical story revolves around the organizational innovations of Shulgi and the sources covering the fall of Ur. What was innovative about the Ur III state was its incorporation of the two estates, who had until then evolved as dominant in the fertile crescent, into one directive. By internally opposing the temple- and place estate within provincial rule, the Ur III state found a stable, legitimized, route on which to conduct its allocation mechanisms. The fall of this stable state is in histories of Mesopotamia attributed to outside forces. The assessment in the thesis follows the efforts of modern scholars like Michalowski, who place high doubt on the sources. While it is undeniable that the Shimashkians brought Ur to fall, an interpretation that the deathblow was dealt internally is adhered to in the thesis, by the defection of Ishbi-Erra.

The internal evolution of the allocation mechanism and its institutions gives the practical side of what weakened Ur III. The thesis concludes that the problem of ‘who sanctions?’ is what undid the highly sophisticated economic organization of the Ur III state. The formal institutions put in place by Shulgi, did not receive the needed sanctioning of the state. Examples of this are the reintroduction of inheritance for state offices; the increase of specification for commodities being the only traceable sanction of malpractice and a nonresponse towards diminishing output. What, however, seemed a constant safety net in the evolution of the administration, was private exchange. Throughout its evolution the central bala fund, the main allocation mechanism, was supported by this. First in the form of loans, who pre-emptively solved local deficits of the fund, and later in pure market exchange when the bala fund could no longer provide the necessary commodities, by buying these commodities from merchants. 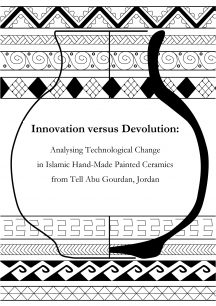 This thesis re-analyses the legacy collection of Hand-Made Painted ceramics from the Middle-Late Islamic site of Tell Abu Gourdan in Jordan from a chaîne opératoire perspective. Hand-Made Painted pottery is considered to be an important indicator of social and economic changes within this period. Our understanding of how Hand-Made Painted pottery was manufactured and embedded within consumption practices has thus far been limited because many scholars still rely on Henk Franken and Jan Kalsbeek’s (1975) book Potters of a Medieval Village in the Jordan Valley Excavations at Tell Deir ʻAllā: A Medieval Tell, Tell Abu Gourdan, Jordan to interpret this pottery. By re-investigating the legacy collection of ceramics from Tell Abu Gourdan currently stored within the Faculty of Archaeology at the University of Leiden, it has been possible to provide a new perspective on the material itself, whilst also writing a history of research into ceramic technology and research into Islamic Archaeology at the University of Leiden. By applying new and inventive methods to investigate the manufacture of Hand-Made Painted pottery, it has allowed this study to provide answers for the big questions about the relationship between technology, change, innovation and devolution in the past.