We regret to share the news that our colleague, friend, and former professor of Assyriology at Leiden University, passed away on 15 May 2021. 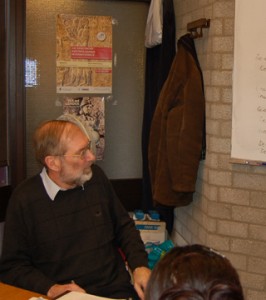 It is with great sadness that we share the news that Wilfred van Soldt, emeritus professor of Assyriology at Leiden University (2003-2016) passed away on May 15th. Wilfred served as a member of the board of NINO and NIT (2007-2014) and was informally connected for many years before and after. For the society Ex Oriente Lux, he gave lectures throughout the Netherlands on Ugarit, astronomy, and other topics; and he was editor of the society’s magazine Phoenix (1985-2000). He was a beloved speaker and teacher, because his lectures displayed a vast and impressive knowledge, combined with a dry sense of wit. Wilfred will be missed by all of us and we are immensely grateful for everything he has done for our institute, and for the field of Assyriology in the Netherlands and abroad.

The below message was distributed by Wilfred’s successor, prof. dr. Caroline Waerzeggers, via the Agade newslist:

Wilfred obtained a degree in civil engineering before studying with Philo Houwink ten Cate at the University of Amsterdam (1971–1974). He continued his graduate studies at the VU Amsterdam and completed his PhD under supervision of Klaas Veenhof in 1986 with a grammar of the Akkadian of Ugarit. From 1983 to 2016, he worked at Leiden University, first for the AbB project and from 2003 onwards as Chair of Assyriology. During his career, he published many important contributions on a wide range of topics, including Old Babylonian letters, Ugarit, Middle Babylonian society, the history of astronomy, and the Akkadian, Kassite and Hurrian languages. In 2006, he received a grant from the Dutch Research Council for a project on the transmission of cuneiform knowledge from Mesopotamia to Anatolia and the Levant, a project that he conducted with great vigour. From 2010 to 2012 he co-directed excavations at Satu Qala in Iraqi Kurdistan.

Many of our international colleagues will remember him as the dedicated secretary of the International Association for Assyriology, which he served from its foundation in 2003 to 2016. In Leiden, Wilfred devoted much of his time to teaching students and to steering the department through challenging times. Those who studied and worked with him will keenly remember his quiet erudition punctuated by a most unique sense of humour. He will be dearly missed.

Condolences can be sent to his wife and son, Dina and Benjamin.