Results from the 2015 autumn fieldwork campaign on the Rania Plain 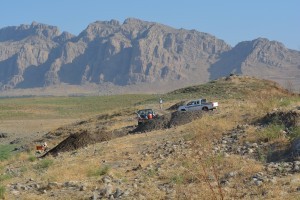 Resurrecting the Palace of Kuwari

The NINO team is now back from its autumn season on the Rania Plain in the Kurdish Region of Iraq. Our excavation on Shemshara exposed yet another room in the nearly 4000 year old palace on the Main Hill – originally excavated in 1957-58, but never published – except the important archives of cuneiform tablets found in it. Recently our own efforts – coupled with unpublished photos from the old excavations – have enabled us to reconstruct much of the plan of this building – which we can now update further…

On Land, on Water, and in the Air

The last weeks of the season were busy, and culminated with a finale the last day in the field where we did archaeology literally on land, on water, and in the air. While part of the team finished sampling and salvage operations at Araban, another group travelled by boat to sites which are now islands in the artificial Lake Dokan, and did basic recording and sampling there. The recording included UAV photography.

One site visited, Baiz Agha, proved to have the clearest evidence of Middle Assyrian occupation we have yet seen on the Rania Plain.

The 4th Millennium BC site of Araban, located on a long stretch of the east terrace of the Zab river plain, is almost entirely eroded – except for numerous pits dug into the natural terrace. It must have been a short-lived, but locally important site, founded in the Late Uruk period. It is tempting to compare it to the famous Uruk ‘colony’ at Habouba Kabira on the Syrian Euphrates… We plan further work at this site in autumn 2016.