“Everyone considers their owl to be a falcon”. This old Dutch saying held a literal truth when scans showed that the falcon mummy in NINO's Böhl Collection is actually that of an owl. The bird mummy is undergoing restoration so that it can (briefly) be put on display. 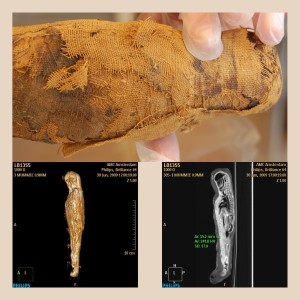 The bird mummy in the Böhl Collection

The De Liagre Böhl Collection kept by NINO mainly consists of clay tablets, but there is a small subcollection of Egyptian antiquities. Among these is the mummy of a bird (inventory number LB 1355), a beautiful example of an animal mummy of the (Late Period or) Graeco-Roman Period, with decorative linnen wrappings. The head bears the markings of a holy falcon.

However, scans and X-rays made in 2009 at the Academisch Medisch Centrum, Amsterdam, have shown that the mummified remains are not those of a falcon, but consist of the head, body and wings of a barn owl (Tyto alba) and the legs of a second bird of unknown species.

At the preparations for the NINO jubilee exhibition in 2014, it became apparent that the condition of the bird mummy was not sufficient to be transported and exhibited. Instead a photograph was temporarily put on display.

With financial help of a small number of Dutch (Egyptological) societies we were able to engage restorer Emmy de Groot (University of Amsterdam and freelance textile restoration). As the Böhl Collection was originally put together for the purpose of (university) education, the Department of Ancient Cultures of the Mediterranean World at Leiden University is involved as well.

Restoration of the bird mummy has taken place on 5 March 2015 at the National Museum of Antiquities' restoration workshop. Emmy de Groot gave presentations to two groups of Egyptology students.

The bird mummy is on display at the Museum (first floor, Ancient Near Eastern department) instead of its photograph starting from 17 March, until the closing date of the NINO jubilee exhibition, 3 May 2015.

A presentation of the results to a broader public was given on 17 March. At 15.00 hrs Drs. Esther Holwerda spoke on ancient Egyptian animal mummies, with special focus on our bird mummy.

Download the poster (in Dutch) for this mini-project as a pdf file.

View three scans (short videos) of the bird mummy on our Facebook page:

We thank the National Museum of Antiquities for kindly making their restoration workshop available!