We are constantly working on new volumes in our publication series PIHANS (mainly archaeology and Assyriology), Egyptologische Uitgaven (Egyptological Publications) and Achaemenid History. Our journals Bibliotheca Orientalis (three fascicles per year) and Anatolica (one issue per year) appear regularly. The following publications are expected. 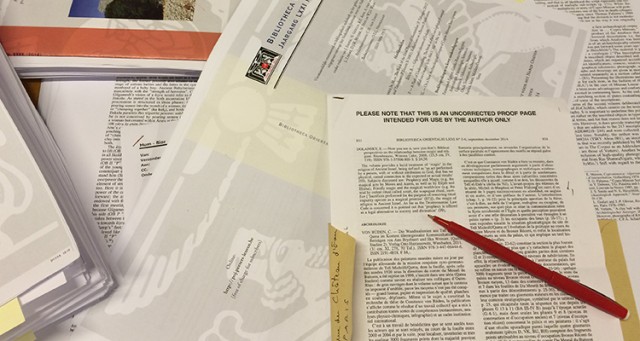 Our annual journal with contributions on the history and archaeology of Anatolia and adjacent regions from prehistory to the Ottoman era.

Zagros Studies contains nine articles on the archaeology and history of the Zagros Region in Iraq. Five of these are expanded versions of papers that were delivered at a conference celebrating the 75th anniversary of The Netherlands Institute for the Near East (NINO) in December 2014. The other articles present results of the NINO archaeological project on the Rania Plain, and new investigations on the Shemshara Hills and other sites on the plain, which are threatened by Lake Dokan; a spectacular terracotta “tower” is published here for the first time (see illustration on the front cover).

This book contains a selection of nineteen articles published by K.R. Veenhof, focusing on his main field of study: law and trade in the Old Babylonian and Old Assyrian society of the early second millennium B.C. They were originally published in journals, conference proceedings and collective volumes over the past fifty years. Their reissue here is motivated by their lasting value and their fundamental importance to the study of these subjects.

It includes both “broad” articles, which give an introduction to or an overview of a specific subject, e.g. Old Assyrian trade and the practice of justice in Babylonia in the early second millennium B.C., and “narrow” ones that give an in-depth study of a single issue or a single text, such as a problematic paragraph of Hammurabi’s law code or the meaning of the noun iṣurtum. The first two articles provide a general introduction to the subject; the next nine focus on Old Assyrian society, and the final eight concern Old Babylonian.

The inclusion of “broad” and “narrow” articles makes this publication of interest both to the well-informed general reader interested in the Ancient Near East and to the specialist working on Old Babylonian and Old Assyrian society.

The Egyptian Readingbook is a classic of Dutch Egyptology. After its first publication in 1948 it has remained in print and it is still being used all over the world in teaching students to read the Middle Egyptian stage of the Egyptian language. The book contains a wide selection of historical texts, a few classic literary pieces and some religious texts handwritten in the beautiful and clear hieroglyphic handwriting of Adriaan de Buck. This new edition contains a few additional texts, notably some of the Coffin Texts and Book of the Dead spells, and a new introduction by Olaf E. Kaper.